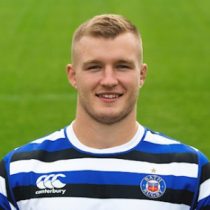 2017/18 was a breakthrough year for Britton, who made his senior debut for Bath against in the 21-8 victory over Newcastle Falcons Anglo-Welsh Cup in January.

The second-rower also captained the University for the second consecutive year in their BUCS Super Rugby Campaign as well as playing alongside fellow Bath Academy player Wil Partington for England Students at the end of the 2017/18 season.

Will was with Bath Academy as an U18 player alongside his studies at Dauntsey’s School in Wiltshire, before embarking upon his degree at the University of Bath.

During the 2018/19 season, he was dual registered for Yorkshire Carnegie and Bath.

He made the move to Doncaster a permanent one when he signed a new deal with the side in November 2020.