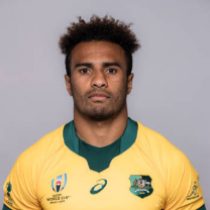 On the international stage Will stepped up into the Wallabies captaincy during the June Test window against Scotland and Wales and also in the early stages of the Rugby Championship before a serious knee injury forced the talented playmaker to go under the knife.

Will’s efforts in 2012 came after a memorable 2011 season where he confirmed his status as an elite talent in world Rugby after winning his second straight Pilecki Medal for Players’ Player. He was also crowned the Australian Super Rugby Player of the Year in 2011, after finishing behind his halves partner Quade Cooper in 2010.

Will made his Super 14 debut in 2007 as a rookie and by the end of the season had established himself in the squad as an exciting player to watch. He made his debut for the Reds before even playing a match of senior club Rugby.

A Queensland Under 19 scrumhalf in 2006, Will was picked straight out of the Colts competition before winning his maiden cap in 2007 against the Hurricanes at Suncorp Stadium. He was selected as 1 of 2 scrum halves in Cheika's 31 man squad for the 2015 RWC.

Genia left Australia at the start of the 2015-16 season to play for Stade Français.

The scrumhalf was the 78th Wallaby to captain Australia, after skippering the side against the United States of America at the 2011 Rugby World Cup.

Genia became just the tenth Australian Test centurion when he ran out against England at Twickenham last year, and only the second-ever Australian scrumhalf after George Gregan to earn the honour.

Genia made his Test debut 10 years ago against New Zealand in July 2009 and is line to represent Australia at three Rugby World Cups. The halfback is set to play a key role in the Wallabies’ 2019 Rugby World Cup campaign before joining Kintetsu in Japan’s second division next season.

The Wallabies veteran announced he will retire from international rugby at the end of 2019 following the Rugby World Cup in Japan.