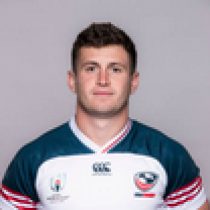 Magie was born in London, England, playing rugby as a child and eventually becoming captain of the University of Leeds rugby team.

He was selected to the USA Rugby Men’s Junior All Americans (U20) and again was named captain, this time for the 2012 Junior World Rugby Trophy.

In 2013, he signed a professional contract with the Ealing Trailfinders of the English Championship, England's second division. Magie left Ealing the following year to sign with Old Albanian Rugby Football Club (OAs) of the National League 1.

At season's end, Magie went to the United States and signed with the Denver Stampede of PRO Rugby North America, kicking the game-winner over Ohio in the league's inaugural match.

In May 2017, the flyhalf was named USA Men's Eagles squad for the Summer Series and Rugby World Cup 2019 Qualifiers in June and July.

Magie led Major League Rugby in conversions attempted and conversions made in 2018 and started at flyhalf in the inaugural MLR Championship in 2018 with the Glendale Raptors.

In 2020, he inked a two-year deal with Austin Gilgronis.