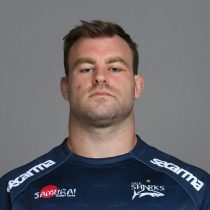 John began his playing career at Pontypridd and went on to represent Wales across all junior levels.

He also spent time with Cardiff Blues before moving to New Zealand, spending two years with the Northland province where he played in New Zealand's domestic ITM Cup.

John then returned to the UK in 2014 to join Doncaster Knights where he emerged as one of the Championship's leading tight-head operators before joining the Sharks last summer.

In May 2017, Premiership side Sale Sharks signed prop WillGriff John from Championship club Doncaster Knights. In March 2018, Sale Sharks extended his contract by a further three years after he established himself as one of the Premiership's brightest emerging front-row talents.

John was named in Wales' Six Nations squad on 15 January 2020, by that stage, he had already racked up 64 appearances for the Sale Sharks in just over two seasons with the club.

In February 2021, it was announced that John was set to leave Sale and join up with Welsh club Scarlets in the Pro14.