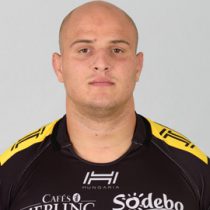 William Demotte is a former Clermont Auvergne youth player who joined Agen in 2012 at the age of 21 years-old.

The French lock stands over 2 metres tall and weighs 124kgs, despite his size Demotte is mobile around the field.

This may have contributed in his shock inclusion in the France squad that toured to Argentina in 2016.

Demotte made his international debut against Argentina and has since brought his good form back helping Agen to a strong 2016/17 Pro D2 campaign.

Demotte help Agen secure a spot in the 2017/18 Top, before signing for La Rochelle.