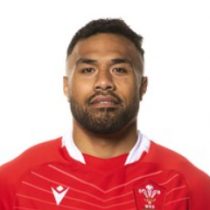 Willis Halaholo is a former New Zealand Schools star, where he played alongside All Blacks Tawera Kerr-Barlow, Elliot Dixon and Charlie Ngatai.

Halaholo was selected by Hurricanes coaching management following an excellent ITM Cup season for Southland where he topped many of the competition's offensive statistics.

As a physical midfielder, Halaholo developed his game alongside experienced teammates Conrad Smith and Ma'a Nonu.

Back in his high school days, Halaholo was a key member of the extremely successful Mt Albert Grammar 1st XV in 2010, along with fellow Hurricanes newcomer, Iopu Iopu-Aso.

Willis Halaholo joined Cardiff Blues in the autumn of 2016 after taking centre-stage in the Hurricanes march to the Super Rugby title in New Zealand.

He played an instrumental role in the 2018 European Challenge Cup triumph for Cardiff.

In November 2019, he was named in Wales 35-man squad that would take on the Barbarians as one of 5 uncapped players but a week later was withdrawn following an ACL injury he picked up in Round 2 of Europe.

He was then again called up to the national squad in February 2021 for Wales' Six Nations campaign. He made his test debut in the Six Nations win over Scotland at Murrayfield in 2021 as an early replacement from the bench.

Days after making his international debut, the Cardiff Blues announced that Willis Halaholo has signed a new long-term deal to remain at the Arms Park.