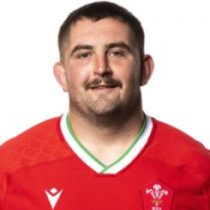 Llandovery born and bred Wyn Jones had made 90 appearances for his home club before the start of the 2016-17 season, scoring 10 tries over six professional seasons with the Principality Premiership side.

Jones’ first regional appearance was off the bench against Gloucester Rugby in a 13-7 victory in 2013-14 season and also featured, again as a replacement, in the last round of the LV Cup campaign against opponents London Irish in the final pool game of the 2013-14 campaign.

The prop has since made a further fifteen appearances for the Scarlets, including two European appearances against former champions, Toulon and Leicester.

He was a mainstay of Scarlets' pack during the 2016/17 season playing 28 competitive games including appearances from the bench in both the PRO12 semi final and final in Dublin.

In May 2017, the internationally uncapped Jones was named in Robin Mc Bryde's summer tour squad to play Samoa & Tonga.

In November 2017, he put pen to paper on a new contract, keeping him with Scarlets for the next few years.

Jones had made 90 appearances for his home club before the start of the 2016-17 season, scoring 10 tries over six professional seasons with the Principality Premiership side.

Jones made his test debut against Georgia in 2017 and made a further 2 appearances for his country before being named in Wales' 2018 Six Nations squad.

Once again, Jones was named in the Wales squad for the 2018 Summer Tour and will look to add to his 8 Test caps.

Jones went into the 2018 November International with 9 tests under the belt.

He was named in Scotland's 2019 Six Nations squad having had 3 previous Six Nations appearances.

After his 100th appearance for Scarlets, Jones signed a new deal in January 2021 to remain at the club.

In May 2021, Jones gained selection for the British & Irish Lions tour to South Africa that same year.