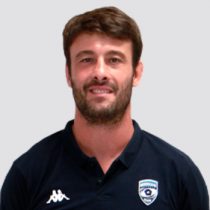 A Toulousian through and through, he spent most of his career playing for the Stade Toulousain and moved to the Aviron Bayonnais in the French Top 14 club competition in 2007.

Between 2001 and 2003, he was the top-scorer in the French Top 14 for 3 consecutive years. He was also a member of France's squad at the 1999 Rugby World Cup (in which France were the runners-up) and notably participated in the epic semi-final against New Zealand.

He was selected in the French squad for the 2003 Rugby World Cup but had to leave the team before the beginning of the competition due to an injury. He was considered one of the most talented French players of his generation (he was part of the team which won the junior world championship in 1995) but his career was disturbed by recurring knee injuries.

Since his retirement, Garbajosa worked with La Rochelle helping the side gain TOP14 status and become a regular playoff contender. He worked closely as the assistant coach before moving into the head coach role for the 2018/19 season.

However, he left for Montpellier at the end of the 2018/19 season to take up the head coach role despite being contracted until 2021.

In January 2021, Montpellier released Garbajos from the remainder of his contract after a poor run of results.