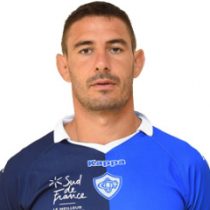 A hard-working back rower, Yannick Caballero was one of Montauban stand out performers between 2005 and 2009 helping the side to the Pro D2 title in 2006.

The powerful and durable flanker made his test debut for France off the bench against Australia in 2008 and added one more cap to his tally over his career.

He won his second Top 14 title with Castres in 2018 and made over 150 appearances for the club from the city of his birth.

In 2019, he opted to call time on his professional rugby career but hinted he may still continue playing amateur rugby.