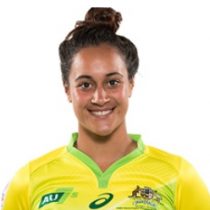 In 2017 Tim Walsh picked Meakes in his squad for a five-game series against their trans-Tasman rivals in Bendigo.

She played so well she launched herself on to Walsh's radar and the versatile back, opening the door for her to chase a sevens deal to potentially play on the world circuit and at an Olympic Games.

She has been included in the Aussie Women Sevens squad for the 2018 Rugby World Cup.