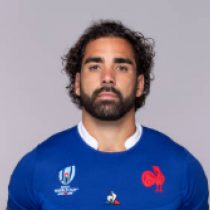 The full-back/winger started his career playing for Toulouse in 2005, scoring his first try in 2006 against CA Brive. He proceeded to move to Agen in 2008 and scored 14 tries that season in the D2.

Bayonne took notice of this and signed him in 2010 where he had an impressive opening season. This led to his international debut against Argentina in 2010. He returned to Toulouse in 2012, where his form continued to improve. He remained in Saint-Andre's plans throughout the 2013 Six Nations campaign.

Huget was then selected for the Six Nations Championship in 2015, starting all five games and being one of France's star performers. A strong end to the 2014/15 season with Toulouse saw him selected in the French squad for the 2015 Rugby World Cup in England.

After a torn ligament in his right knee in France’s World Cup opener against Italy, Huget made a full recover and made his return in Toulouse's warm-up win against Racing 92 and scored a try in a 35-21 defeat of the Top 14 champions.

Between his RBS 6 Nations debut in 2011 he played in all games, except when not selected in 2012, up to the end of the 2015 campaign. Named Man of the Match when scoring his first two RBS 6 Nations tries in the 2014 opening round victory over England, added a third try vs Scotland in round 4.

2016 was another successful year for the winger as he was able to recover his form he had prior to injury. He was able to reclaim his spot in the French side and was selected in the 2016 November internationals and the France 2017 Six Nations side. Huget heads into the Six Nations 2017 having previously appeared 20 Six Nations matches, scoring 3 tries.

Huget was once again included in the France squad and toured with the side to South Africa for a three-match series he has 47 test caps.

He was named in the 2019 Six Nations squad with 25 previous 6 Nations appearances.

His performances, in particular his double in the final of the Top 14, allowed him to win the only title of his career and was included in the France squad for the World Cup in September 2019.