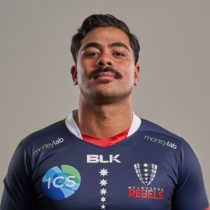 Tonumaipea returned to Melbourne in 2020, following an impressive season in the NRL with the Gold Coast Titans in which the versatile centre made ten appearances, scoring three tries and averaging 120 running metres.

Prior to his Sunshine State stint, Tonumaipea was a highly valued member of the Melbourne Storm, becoming one of only three born and bred locals to have ever represented the club.

After making his first-grade NRL debut in 2014, Tonumaipea went on to play 44 games for the Storm, scoring 12 tries and producing a level of consistency that would lead to international honours with Samoa at the 2017 Rugby League World Cup.

A product of Victoria’s local development pathway’s program, Tonumaipea spent his junior years playing for the Northern Panthers and Broadmeadows-based side, the Northern Thunder, before joining the Victoria Thunderbolts where he would be named Under 20’s Player of the Year.

In October 2020, the Melbourne Rebels announced Young Tonumaipea joined the Super Rugbys side on a two-year deal.