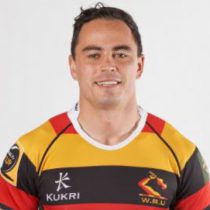 An impressive work rate, terrific speed and a knack for finding the gap make winger, Guildford, an important asset to the Crusaders.

Like fellow Crusaders back Israel Dagg, Guildford hails from the Hawkes Bay and plays his provincial rugby there. His Super Rugby debut was for the Hurricanes in 2008 but he made the move to the Crusaders in 2010.

Guildford has had an extensive representative career, being involved in the New Zealand Secondary schools, Under 19 and Under 20 squads, as well as winning the IRB Junior World Championships in 2008 and 2009.

Guildford was first selected for the All Blacks for the end of year tour in 2009 and was the youngest player in the squad. He has also represented New Zealand in Sevens, competing in the 2010 Commonwealth Games in New Delhi and winning the Gold Medal against Australia.

In January 2014, he signed a contract for two years (with the option of a third) with French Top 14 side Clermont Auvergne. Initially, he was supposed to join them at the conclusion of the 2014 Super Rugby season, but in May 2014, he was given an early release from his contract by the Crusaders.

In May 2016, Guildford started for the Waratahs and scored his first try for the side showing his blistering speed off the mark.

In May 2017, Guildford signed a contract with Wellington for the 2017 season, marking his return to first-class rugby.

In June 2017, Guildford signed for New Zealand provincial side Waikato. The 10-test All Black, who shared in his country's World Cup success on home soil in 2011, was released by Super Rugby's New South Wales Waratahs last year.

He had a stand-out season for the Mooloos at fullback, which included leading the province to back-to-back national titles in the Sevens format. However he failed to secure a Super Rugby contract and believes New Zealand Rugby were not ready to forgive him following a series of off-field incidents.

In February 2018, former All Black signed for French Pro D2 side Nevers on a two-year deal.