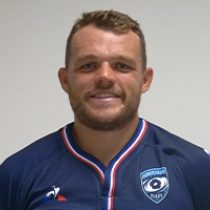 Mercer grew up in Northowram, near Halifax, but moved to Glasgow aged eight. He is the son of former New Zealand rugby league international Gary Mercer.

At 16 he was given a scholarship to attend Merchiston School in Edinburgh but he represented England at youth level.

A member of the Bath Rugby Academy, he made his debut in a 58-5 victory against Newcastle in September 2016 and has gone on to establish himself as a regular in the first-team squad.

Mercer captained England U20's to the 2017 Six Nations title, winning the Grand Slam in the process, and narrowly lost out to New Zealand in the U20 World Championship final that summer.

A strong ball carrier and a formidable force in defense, Zach signed a senior contract extension, which saw the Academy player promoted to the senior squad and committed his future to the Club until the end of the 2018/19 season.

Mercer was nominated for the (2016-17) RPA Young Player of the Year, as voted for by Aviva Premiership players based on performances in domestic rugby this season.

He continued to put in impressive performances with Bath and earned a call-up - as an apprentice - to the England squad for the November internationals.

The call-up was followed by an inclusion as one of 8 uncapped players in Eddie Jones' 35-man squad for the 2018 Six Nations opener against Italy.

On 27 May 2018, Mercer started for England at number 8 in a non-test match against the Barbarians, scoring a first-half try on his England debut.

Bath Rugby confirmed that Mercer agreed on a two-year contract extension, which will keep him at the Club until the end of the 2020/21 season.

Mercer earned another England call up in November 2018, making his debut against South Africa after Ben Morgan was dropped.

At the end of the 2020/21 season, Mercer signed a deal to join French Top 14 club Montpellier. He played his 100th and final appearance for Bath in the final game of the season against Northampton.