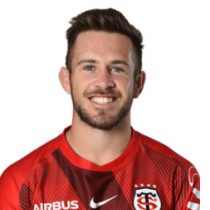 After featuring heavily for the Brumbies during their 2012 trial matches in Darwin and Cairns, Holmes made his Super Rugby debut against the Chiefs in New Zealand, ironically the same side his father had played for just over a decade earlier. Injuries to Matt Toomua and Christian Lealiifano provided plenty of opportunities for Holmes in 2012.

He took his chances with both hands, including an eye-catching starting debut against the Hurricanes in Wellington that netted him 22 points and Man of the Match honours.

Holmes was first spotted by Brumbies coaches playing for Norths in Sydney’s Shute Shield. Along with the rest of the current squad he was invited to the talent identification camps at Narrabeen where Jake White offered him two years in Canberra.

Having signed for French side La Rochelle, he left the club to continue his playing career with Toulouse in an undisclosed contract from the 2017/18 season.

The 2020 season sees him remain as an integral part of the Toulouse squad.