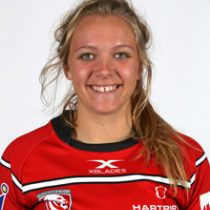 Zoe earned her first full cap when playing in the final four minutes against France at Salt Lake City in July 2016, scoring the try that brought a 17-13 win.

She made 8 appearances for England U20s, having graduated through the age groups. A former Hartpury College student, Zoe is sudying a course in applied science and exercise science.

Zoe appeared eight times for England U20, having graduating through the age groups before becoming one of 28 players offered a full-time contract in January 2019. She however missed the entire 2019 Women’s Six Nations because of injury.

She started playing aged nine at Scarborough RFC where her brother Jonathan has also played.

A former Hartpury College student, Zoe was educated at St Martin’s Church of England School and Scalby School, represented Yorkshire at U15 level and was a member of the England U18 Sevens team that became the inaugural European champions in Sweden.

She was part of the 2020 Women's Six Nations England team and was named the 2020 Rugby Players’ Association Telegraph Women’s Sport England player of the year.

In April 2021, she was named Player of the Match after England's Six Nations victory over France

December 2021 would see Zoe being named World Rugby's Women's Player of the Year.