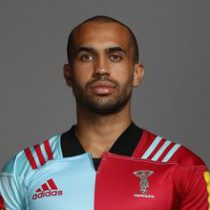 Morris started playing at Bedford Junior Blues when he was five. From the age of 18 he was training with the Saracens Senior Academy but still playing for Bedford.

He played England Clubs at the age of 18, then for England Schools U18 and followed through to the U20s. Morris played the majority of his rugby for England U20 due to being out for six months with a series of groin injuries.

In May 2016, Morris signed with Harlequins from the Saracens club in the Premiership.

In July 2017, Morris signed a new deal with Quins after an impressive 1st year at the club.

The full-back, became a key member of the Quins first-team squad as the Club has climbed to third in the Premiership and reached the quarter-finals of the Challenge Cup.

In January 2019, he signed a new deal with the club. In the opening game of the 2019/2020 season he managed to dot over twice against the Bristol Bears.