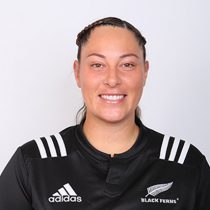 A key cog of the successful Auckland Storm front-row since she debuted as an 18 year old in 2008, Aleisha-Pearl Nelson has now established herself as a vital member of the Black Ferns.

The tighthead prop debuted for her country in 2012 on the tour of England and has now racked up 29 Test caps with her powerful scrummaging and technically adroit work in the rucks and mauls.

She was a key part of the successful Black Ferns Women's Rugby World Cup squad in 2017 and brought up 50 games for the Auckland Storm in the same year.

After missing the first two Tests of 2018 against Australia, Nelson featured in the final three Tests of the year against USA and France where she added great impact from the bench.