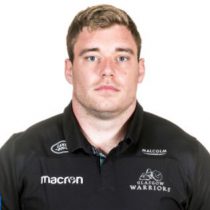 Alex Allan represented Scotland at U17, U18 and U20 level. The front rower was part of the Harrogate RUFC side which won the Yorkshire Cup three times while he also came off the bench to play for Sale Sharks against Saracens in the LV Cup in 2011.

While plying his trade for city side Edinburgh Accies, Allan made his senior professional debut for the club in the Heineken Cup against Munster in 2013. He made his debut for Scotland in June 2014 when he came off the bench against USA in the Summer internationals.

He has represented Scotland at age grade levels up to U20s and played for Scotland A in their game against England Saxons at Scotstoun in 2014..

In February 2018, he signed a new one-year contract with Glasgow, which meant he was to remain at the club until at least May 2019.

The Scotland international loose-head joined the club in 2014 and has gone on to make 98 appearances for the club.

Ahead of the 2019/20 Champions Cup he has 24 competition appearances.