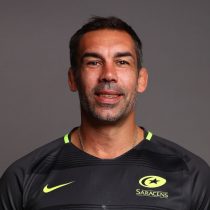 As a player, Sanderson was an abrasive back row who won five caps for England, representing Sale Sharks and Sarries at club level.

His brother Pat also represented England and played for the likes of Sale, Harlequins and Worcester.

His first Sale coach, John Mitchell, also had a great influence on him as did Steve Diamond and Jim Mallinder, both of whom he played alongside when he broke into the first team.

He scored a try on his England debut after coming on as a replacement against Romania in November 2001, having captained the England midweek side in North America soon after being selected for the England XV against the Barbarians at Twickenham. He made his Six Nations debut as a replacement against Italy in March 2003 and was part of the wider 43-man squad for the World Cup, playing in the pre-World Cup warm-up matches against Wales and France in Marseille.

He was forced to retire from rugby in 2005 due to a back injury and immediately moved into coaching at Saracens.

He had spells with Queensland Reds and England Under-18s and in 2008/09, Sanderson stepped on to the Sarries coaching ladder as the club’s Forwards Coach.

Under the title of Forwards and Defence Coach, he transformed the Men in Black’s defence into a formidable force.

In January 2021, Sanderson was appointed the new Director of Rugby at Sale Sharks.