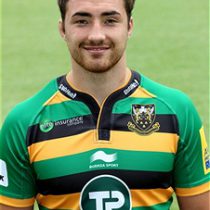 Alex joined Welsh in January 2016 on a dual-registration from Northampton Saints, before making the move permanent at the end of the season. After making his debut off the bench at Goldington Road, he marked his first start for Welsh by touching down against London Scottish at Old Deer Park.

He claimed a second try for the club in the away win at Jersey. In total, Alex made five appearances for the Exiles in 2015/16.

Before joining Welsh, Alex had been developing his skills in both the Premiership environment and in the Championship with Moseley.

The forward has made six first-team appearance for Saints, having made his debut for the club in a 33-6 victory over Gloucester Rugby at Franklin's Gardens in the LV= Cup in November 2013.

He joined the academy at Northampton in 2011 and was part of the Wanderers side which reached the Aviva A League final in 2013/14.

Woolford was selected in Northampton Saints' squad for the 2012 Premiership Sevens, and has also gained National League 1 experience at Coventry.