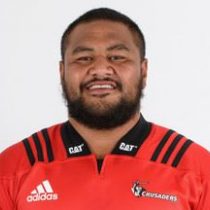 Born in Auckland, Makalio played representative rugby for Auckland from under-15s level through to Auckland B.

He made the move south to link up with the Harlequins club in Blenheim and went on to make his provincial debut for Tasman in 2016.

The hooker played in all 12 games that season, including the Premiership Final against Canterbury. Three days after that match, Makalio was named in the Crusaders squad for 2017 and earned his first Super Rugby cap in round eight of the side’s Championship-winning season.

In May 2017, he was selected to represent the New Zealand Provincial Barbarians side who faced the British and Irish Lions in a historic match in Whangarei during their tour to New Zealand.

Since making his debut against the Sunwolves in 2017, the front-rower has more than 30 appearances in Super Rugby for the Crusaders.

He heads into the 2020 Mitre 10 Cup having made 42 appearances for Tasman Makos.

A neck injury picked up during the 2020 Mitre 10 Cup season ruled Makalio out of the 2021 Super Rugby season for the Crusaders.