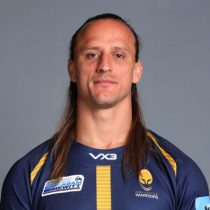 Bresler rose to prominence at the Sharks after the departure of Alistair Hargreaves to Saracens and enjoyed regular game-time and fine form.

A product of Durban High School, he provides a solid line-out option at just short of two metres tall and gets through plenty of work in the loose as well.

The Namibian-born second row played for the Sharks from 2011 to 2014 and made 42 Super Rugby and 44 Currie Cup appearances.

He then moved to Scotland and signed for Edinburgh in 2014 where made 61 appearances, helping them to the European Challenge Cup final in 2015.

In December 2017 Bresler signed with Worcester Warriors and joined his new side immediately.

He became a first team regular in the 2018/19 season, impressing as a lineout jumper, hard tackler and aggressive ball carrier.

Bresler signed a contract extension with Warriors in December 2019 following 48 appearances for the side.