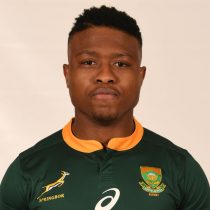 Born and raised in the Eastern Cape, Aphiwe Dyantyi represented Eastern Province at U13 level in 2007 and was touted as an exciting talent at school level.

However, during his time at Dale College, he was told he was too small to play for the 1st XV during his matric year.

He gave up on the sport after school and decided to pursue other interests such as his studies at the University of Johannesburg where he got a degree in Marketing.

During his first year at Varsity Dyantyi represented the University football side before being convinced to help his Koshuis rugby side out by playing a few games.

His form with the side lead him to being called into the Young Gun side and then the UJ senior squad in Varsity Cup.

Having originally played flyhalf and fullback, Dyantyi was convinced to play on the wing by one of his coaches, where he excelled for UJ for his first two seasons in the Varsity Cup.

His 2017 season in the competition he spent most of the season at outside centre and earned a contract with the Lions.

He made his Currie Cup debut for the side later that year and his performances in 2017 saw him being named in the Lions 2018 Super Rugby squad.

He made his Super Rugby debut, on the wing, in the Lions opening Super Rugby match of the 2018 season against the Sharks and scored a fantastic try in the match.

Dyantyi's impressive start to his debut Super Rugby season earned him a call-up to the Springbok squad for the 2018 June Internationals against Wales and England.

In November 2018, he was named World Rugby Breakthrough Player of the Year 2018.