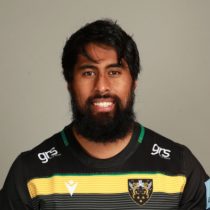 Tuala is Samoan-born Fullback who began his senior rugby career in New Zealand with the Counties Manukau Steelers. He made his debut in the 2009 Air New Zealand Cup at the age of just 20.

Having spent five seasons in Auckland, Ahsee joined the Saints on a short term basis in February 2015 due to the injury of Ben Foden. He later was offered a permanent deal.

Tuala's debut for Samoa came in November 2014 against Canada in Vannes. He was one of his country’s impressive performers in the 2015 Pacific Nations Cup.

Awarded Saints Supporters Breakthrough Player of the Year for his performances in the 2016/17 season.

Since joining Saints, Tuala has notched up over a half century of Premiership appearances, scoring a try on his debut in the Anglo-Welsh Cup against Wasps.

He featured at the Rugby World Cup for Samoa and took his test cap tally 22 with 4 test tries.

February 2020 saw him sign a new deal to remain with Saints.