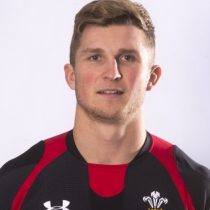 Jenkins made his debut for the Ospreys regional team in 2014 having previously played for Aberavon RFC, Bridgend Ravens, Mumbles RFC and Swansea RFC.

The centre made the switch to the Trailfinders for the 16/17 season and made an immediate impact, scoring 5 from 5. However, due to injury throughout the season he only managed 17 appearances, but still managed to cross on 2 other occasions. The coming campaign will certainly will be a huge one for Jenkins.