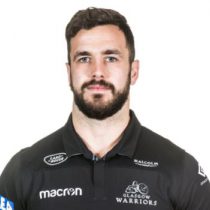 Dunbar, born in Dumfries and raised on the pitches of Annan and Selkirk as a youth is a gifted ball carrying 13 and can usually be found at the breakdown scrapping for the ball. Dunbar has represented Scotland at U20’s and Sevens’ level.

Indeed, Dunbar was part of the Scotland Sevens’ side which won the Las Vegas bowl in the 2011 HSBC Sevens World Series. Dunbar represented Scotland’s U20’s in the IRB Junior World Championship of 2009, scoring a try on his debut against Samoa.

Dunbar showed his versatility throughout the Junior World Championships, as he played three games a centre and two games as a winger. Dunbar made his Glasgow Warriors debut away to Ulster in 2009, and, since then has represented the Scotstoun club on twenty nine occasions.

Dunbar was the only Scot to be included in the Rabodirect Pro12 'Dream team' for the 2013–14 season. He agreed a new Glasgow contact until 2017.

Dunbar has recaptured that form that has made him such a key presence for Warriors and Scotland, The centre has formed a formidable partnership with Bennett at club level. With the recent addition of South African based centre, Huw Jones, Dunbar will be looking to cement his position for the 6 Nations, with an eye on the next World Cup in Japan.

Alex was a starter in the recent Autumn Internationals against Australia and Argentina at Murrayfield before being included in Scotland's squad to compete in the 2017 Six Nations tournament. Dunbar has been capped 10 times in Six Nations and has scored 15 points.

In May 2017, Dunbar was named in Gregor Townsend's Scotland squad for the three-Test tour.

The Glasgow centre added to his 28 caps for Scotland following the 2018 Six Nations.