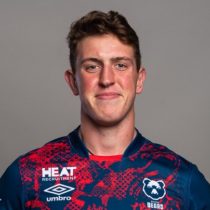 Alex Groves arrived at Bristol Bears in January 2020 on a two year agreement with the integrated Academy.

The lock, who joins from St John’s College in South Africa, has represented the Golden Lions XV at the Craven Week. Groves made his club debut in the Premiership Shield in Bristol Bears 'A's draw with Saracens Storm.

The Bristol Bears lock made his A-League debut against Saracens Storm in January 2020.

He was included in the 2021 England u20 team for the Six Nations.