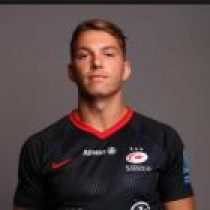 The LV= Cup season of 2011/12 allowed former Nottingham High School pupil Alex Lewington to show his skills in a Leicester Tigers shirt. He scored his first senior try with an excellent solo score in the Cup win at Harlequins and then started the semi-final win over Bath.

Lewington came through the Tigers Academy and picked up Premiership 'A' League winner's medals along with Harris in 2010/11.

He has also been capped by England at U16 and U18 levels. Lewington joined London Irish from Leicester Tigers ahead of the 2013/14 season. An electric winger, his form has already seen him appear for the England Saxons against South Africa A and many are tipping him for a full cap in the future.

Scoring 10 tries in 10 games on his return from injury during the 2016/17 Championship promotion season, Lewington bagged himself a brace in the final as London Irish made an immediate return to the Premiership.

In January 2018, Saracens announced that Lewington would join Saracens at the start of the 2018-19 season.

On his arrival, Lewington had a reputation as an electric winger and a superb finisher and he lived up to that tag by scoring twice on his Sarries debut at Newcastle Falcons before adding a further six tries in his opening eight matches for the club.

He finished his debut season at Allianz Park having notched up 11 tries in 28 matches.