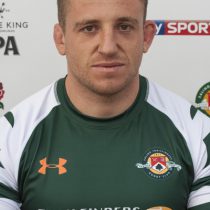 Arthur Ellis is a player who has been voted Players Player and Coaches Player of the year in 2014/15, a contributing factor to this was his 29 tries. He is an Ealing born player and joined the Ealing Trailfinders in 2014 where he continues to play into the 2017/18 season. Ellis has played for London Wasps, London Scottish, and Chinnor to name a few.His strength and speed to the breakdown benefited the Trailfinders again in the 2016/17 season, in which he added 5 more tries to his tally from a 23 further appearances for his local club.