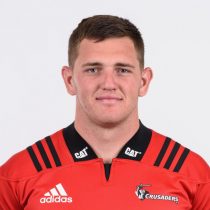 McAlister represented Shirley Boys' High School in the UC Championship competition, and was selected in the New Zealand Schools' squad in 2015. He has progressed through the Crusaders Academy here in Christchurch, and made his provincial debut for Canterbury in 2018.

Although just 22 years of age, McAlister has been unlucky with injury early in his career, but he found good form for Canterbury in the 2019 Mitre 10 Cup which saw him earn Super Rugby selection. He joins fellow hookers Codie Taylor and Andrew Makalio in the 2020 squad.

Brodie McAlister joins the Crusaders squad full time in 2020, although he already has an Investec Super Rugby cap to his name, after making a brief appearance in 2019 against the Blues.