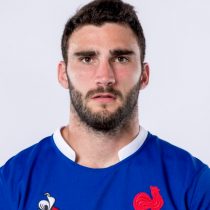 Originally playing for his home town club, joined junior section at Bayonne aged 16, but waited 4 years to make his first team debut - in the Top-14 at Bordeaux-Begles in March 2013.

He was capped for France in the 2014 Autumn internationals after only 20 first team games for Bayonne.

His strong ball-carrying ability was recognized by French coach Philippe Saint-André, and he played his way into the French national team to prepare for the 2016 November Tests.

Ollivon scored his first test try against Samoa in Toulouse in November, two years after his previous cap. He appeared in all three autumn internationals.

Following his return from Japan after World Cup duty with France, he extended his stay with Toulon for a further 5 years in November 2019.

Ollivon was announced as the new captain of the French squad in January 2020 following the retirement of previous captain Guilhem Guirado.

In his first game as captain, he scored 2 tries against England and led them to a 24-17 victory.

He entered the 2020 Top 14 season having made 60 appearances for Toulon, and had scored 45 points.