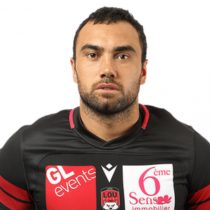 Charlie Ngatai made his Chiefs debut during the 2013 season bringing with him valuable experience and a solid skill set.

The Maori All Black is quick and has represented New Zealand in the Colgate games as a sprinter. He is a former New Zealand Under 20, New Zealand Schools team member and Hurricane. He plays his ITM Cup rugby for Wellington.

He was chosen into the New Zealand squad for the three-Test series in June 2016 but could not make it due to injury. In late May 2016, he re-signed with NZRU and Chiefs for another 2 years.

Ngatai's 2017 season was riddled with head knocks but the 1 Test All Blacks returned to make 5 appearances for the Chiefs (1 v the British and Irish Lions) and helped Taranaki top the Mitre 10 Cup table and win the Ranfurly Shield.

He was then named in the Maori All Blacks squad for their end of year tour. In January 2018, Ngatai confirmed that he is moving to France at the end of the 2018 Super Rugby season, to join Lyon.

Ngatai helped the Chiefs reach the Super Rugby playoffs in his final season with the side taking his cap tally to 67 in the competition and 102 points.

The incredibly skilfull back has been in a hit in Lyon since his arrival, he featured in 24 of Lyon's 28 Top 14 matches in his first season at the club while also featuring twice in the Champions Cup.