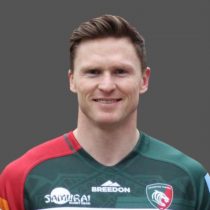 The flying wing is a prolific try-scoring and is widely regarded as the best finisher in England. Having played rugby league in his early days, Ashton made a name for himself in the 15-man code with Northampton Saints. In the 2009/10 season he score 16 tries in 20 matches for Saints and won the Premiership Player of the Season Award.

The quality speedster joined Saracens for the 2012/13 season and became an instant hit at his new club when he scored 2 tries on his debut. Ashton was a regular for a long period for England on the wing but fell out of favour with boss Stuart Lancaster before the 6 Nations in 2014 after the emergence of Jack Nowell and Jonny May.

He failed to register an appearance for England in the tournament but after finding form for Saracens, Ashton was brought into the squad for the New Zealand tour and came off the bench in the 2nd test to score his first try in a year for England. Ashton normally will perform a swan dive, dubbed the 'Ash Splash', after every try he scores - which is rebuked by some.

In May 2016, after missing out on the England squad to Australia, Ashton turned down a trip to South Africa on personal grounds. In October 2016, after 5 seasons with Saracens, Ashton signed for Top 14 outfit Toulon for the 2017/18 campaign.

Ashton spent six seasons at Saracens, becoming the club’s leading try-scorer and winning two Premiership titles and two European Champions Cups but left the club for Toulon with the club blessing as he was granted an early release from his contract.

Sale Sharks confirmed that the 39-Test cap winger signed with the club ahead of the 2018/19 season, he made the switch to reignite his test career with England.

The move worked for the speedster as he made his return to test rugby during the 2018 Internationals scoring a try against New Zealand and was named in the 2019 Six Nations squad with 16 previous 6 Nations appearances and 35 points scored.

Ashton made himself unavailable for the World Cup in Japan due to his wife pregnancy.

In March 2020 Sale Sharks confirmed that the club and Chris reached a mutual agreement to terminate his contract. A few days later he joined the Harlequins.

As of 4 March 2020, Ashton has scored 20 tries in 44 England Tests, with his last international cap coming in February 2019. The former Saracens, Toulon and Northampton winger is the Premiership’s third-highest ever try-scorer with 86.

In December 2021, he left Worcester Warriors with immediate effect by mutual consent and in February 2022 he signed with Leicester Tigers on a short term deal.