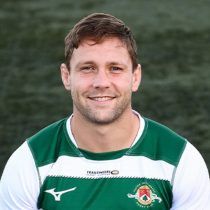 Johnston is a product of the Munster Rugby Academy, and after coming through the youth system he made his debut for the first team in 2015.

That season was a breakthrough year for the Irishman, who went on to make nine appearances in the Pro 12 during that campaign.

After being named the Academy Player of the Year, in 2016/17 he joined the first team on a permanent basis playing regularly alongside the likes of Conor Murray, CJ Stander and Peter O’Mahony.

Johnston, whose brother Bill also plays for Munster, has played against Championship sides before after featuring in the British & Irish Cup for the A team on a number of occasions.

He was one of only two players to be involved in every match of the 2016/17 B&I Cup campaign which they won by beating Jersey in the final, and then went on to captain them this season.

In April 2018, Johnston was signed by Ealing Trailfinders on a one-year deal.

April 2019 saw him sign a new contract with the club.

The former Munsterman made 32 appearances for West London in two seasons before he was handed a new deal.