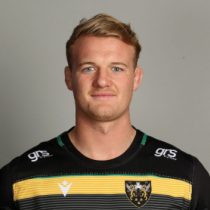 Ribbans had enjoyed a rapid rise through the ranks in Cape Town, helping their Under-19s win the Provincial Championship before making his first-class debut in the Vodacom Cup in 2015.

He was then included in the Stormers’ Super Rugby squad in 2016 and be named as Western Province’s Young Forward of the Year.

After making 18 appearances for Saints and scoring three tries during the 2017/18 season, Ribbans really kicked on in Chris Boyd’s first season in charge of Northampton and played 22 matches in all competitions – starting 19 and crossing the whitewash four times along the way.

Impressing supporters with his lineout prowess and imposing ball-carrying, Ribbans was voted the Club’s player of the month for October 2018 in a standout year for the men in Black, Green and Gold as the side won the Premiership Rugby Cup and reached the Gallagher Premiership semi-finals.

His unrelenting play and set-piece expertise secured his new contract extension of the 2019/20 season at Northampton Saints.

He heads into the 2019/20 season with 47 caps for the Saints, 10 of which coming in European competitions.

Ahead of the Barbarians game and final round of the Six Nations in October 2020 Ribbans earned an England call up.

Ribbans was recalled to the England squad during the 2021 Six Nations as injury cover for his clubmate Courtney Lawes.