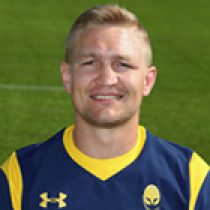 Able to play at either openside or blindside flank, Dewald is a physical player and one of the leaders of the team. Having earned a handful of caps for the Springboks a few years ago, he will be hungry to prove himself as a strong contender for higher honours going forward.

The back rower has tasted success on the international stage as well and crossed the whitewash against Wales at the Millennium Stadium in one of six appearances for his country. He also captained the Emerging Springboks against the British & Irish Lions in 2009.

Before arriving at Sixways, he spent three years with Japanese side Yamaha Jubilo after enjoying a decorated history in South Africa, where he won two consecutive Super Rugby titles with the Bulls in 2009 and 2010.

Potgieter was also part of provincial side the Blue Bulls, scoring ten tries in 65 appearances as they won the 2009 Currie Cup title and 2008 and 2010 Vodacom Cup crowns.

In February 2016, he joined Worcester Warriors from Japanese side Yamaha Jubilo.

In May 2017, Potgieter have announced that South Africa international Dewald Potgieter has signed a new contract to extend his stay at Sixways.

Potgieter has become an influential figure at the Club since his arrival in February 2016 and captained the side on a number of occasions throughout the 2016/17 campaign.

The 30-year-old has now racked up 20 appearances for the Club, despite being ruled out for nearly eight months through injury.