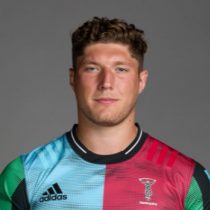 A diverse back-row - who can cover lock - Dino Lamb replaced Evans in England’s 28-man squad for the World Rugby U20 Championship in Georgia and started the final of the U20 Championship as England lost out to New Zealand.

Lamb enjoyed a breakout season in the quartered shirt during the 2017/18 season after joining the full time Academy for the 2016/17 season. The former Cranleigh School student made his debut for Harlequins away to Northampton Saints in the Premiership in September 2017 and scored his first try for the Club against Worcester Warriors in the Anglo-Welsh Cup.

On the announcement that Lamb had signed a new contract with the Club ahead of the 2018/19 season, Head of Rugby Paul Gustard referred to him as being the "ideal modern-day second row", describing him as a "great member" of the squad.

In February 2021, Lamb signed a contract extension with Harlequins for an undisclosed length of time.