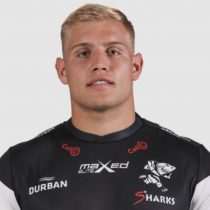 Richardson went onto be named in the South African U20s squad in 2018 having joined the Sharks Academy after school.

In 2019, he was named in the SA Rugby Academy squad before he was called into the Sharks squad during the Super Rugby season and was named on the bench to make his debut against the Lions.

He went on to star for the SA U20s, mostly on the openside of the scrum, as the team finished third overall.

He was named in the Sharks Currie Cup squad.