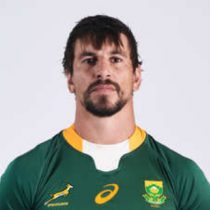 Etzebeth’s rise as a second row force has been meteoric, with him being tipped to rival the legacy of the great Bakkies Botha.

Having starred at the U20 World Cup for the Baby Boks in 2011 Etzebeth was highly impressive in his first Super Rugby season for the Stormers and went on to make his Springbok debut against England in June 2012. At 2.03 metres tall and 123 kg the burly lock does not stand back for anyone and has all the tools to become a Bok legend.

He has since made the Springbok number 4 jersey his own with some quite outstanding performances over the last few seasons. In 2015 he came back from injury to play for the Springboks in the Rugby Championship and the Rugby World Cup.

After a short stint in Japan he rejoined the Stormers in 2016. Etzebeth became the youngest South African player to earn his 50th test cap in the Rugby Championship again Australia 2016.

The Stormers vice-captain was included in the Springbok again ahead of the 2017 June internationals against France.

In August 2017, Etzebeth was named as Springboks captain in the injury absence of Warren Whiteley.

The Springbok lock missed a large majority of the 2018 Super Rugby season through injury and went into the 2018 season with 68 test caps and 54 Super Rugby caps.

The aggressive second-rower made his long-awaited return during the 2018 Rugby Championship after being included in the squad ahead of the competition.

In December 2018, Top 14 side Toulon announced Etzebeth would join them after the 2019 Rugby World Cup. Etzebeth was part of the Springboks squad that went on to win the World Cup, defeating England in the final.

He signed an extension with Toulon until at least 2025 and was included in the Springbok squad to face the British and Irish Lions as well as Georgia and heads into the tests with 85 test caps. He turned out for the South Africa A team who managed a 17-13 victory over Warren Gatland's charges.