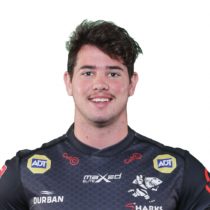 Son of former Springbok Fritz van Heerden whose Springbok career spanned over five years between 1994 and 1999 during which he played 14 Tests and participated in the 1999 Rugby World Cup.

The tall second-rower has enjoyed a strong start to his career and made his SA U20 debut in April 2019.

Van Heerden was included in the Springbok U20 squad for the 2019 U20 Championship in Argentina.

January 2020 saw him being named in the Sharks squad ahead of the 2020 Super Rugby.