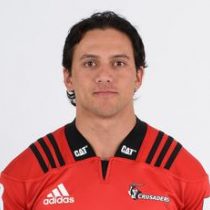 Auckland born halfback Eraeatara Enari grew up in Gisborne and Palmerston North. After school, he moved to New Zealand's South Island to attend Lincoln University where he played Hawkins Cup rugby and won the championship in 2016, during this time he also attended the Crusaders Academy.

Enari comes from a rugby family with his one uncle, Ere Enari, making over 150 appearances for Auckland, 48 for the Blues and 10 Tests for the All Blacks. His other uncle is All Black legend, Michael Jones, who was named by Rugby World magazine as the third best All Black of the 20th century and was inducted in the World Rugby Hall of Fame having won a World Cup and played for the All Blacks in 74 matches in 11 years.

Enari was first named in the Canterbury squad ahead of the 2016 Mitre 10 Cup.

Initially, he was expected to be 3rd choice halfback for the defending champions, however, season-ending injuries to first-choice Mitchell Drummond and his replacement Alby Mathewson saw Enari thrust into the starting number 9 jersey.

He made the most of his opportunity as he made 9 appearances, 7 of them from the start, as Canterbury retained their Mitre 10 Cup Premiership title which was their eighth success in nine seasons.

Enari's form in the Mitre 10 Cup earned him a spot in the Crusaders 2017 Super Rugby squad. He was only able to make one appearance off the bench, in round one vs the Brumbies, in the Crusaders successful campaign.

Later that year he payed a starring role in the New Zealand U20s side that won the U20s World Championship.

Enari performed well as during the 2017 Mitre 10 Cup season behind his Crusaders teammate Mitchell Drummond.

Enari broke his leg in Canterbury's final round Robin match of the season and has subsequently been ruled out of what would be his first full Super Rugby season.

2020 will be just his second full season with the Crusaders.