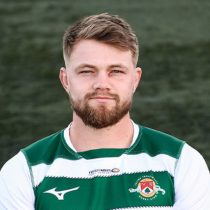 Signing for the Saints Senior Academy for the start of the 2017/18 season, Fraser Strachan proves to be a great prospect in the centre.

The young back has come up through the Saints Academy ranks, starting out with the Midlands U16s on a wider stage.

Strachan began his international career with Scotland, playing through the age-groups before switching allegiance to England on reaching Under-18 level.

Recently featuring with England in the U18 International Series, the young centre now has three Under-18 caps to his name.

Strachan has played mostly Under-18 level at Saints up to now but earned the call to the Wanderers for the Aviva 'A' League final. Coming on for an injured George Pisi earlier than expected, Strachan took to 'A' League rugby like a duck to water, deftly setting up Rory Hutchinson for one of the Wandies' four tries in that game.

The centre continued and bagged himself a winners medal as the side beat Gloucester United to claim the title.

Strachan switched allegiances again and was included in Scotland's u20 Six Nations squad.

He made four first-team appearances for Saints before leaving the club to sign for Ealing Trailfinders in June 2020.