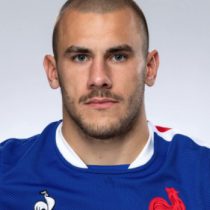 A speedster gifted with raw athletic talent and an excellent turn of pace, Gabin Villiere rose from the depths of the third-tier of French rugby to representing both the sevens and senior French side.

Villiere was Rouen's second-team scrumhalf when England half-back Richard Hill arrived at the club. Hill shifted Villiere to the centres and eventually the wing.

The move worked wonders for Viliere as he touched down for 26 tries in 23 league matches during the 2016/17 season before being scouted by the France sevens set-up. In his first campaign on the World Sevens circuit, he became the first France player to be named man of the tournament at the 2019 Hong Kong leg.

After helping Rouen to get promoted into Pro D2, Villiere joined RC Toulon on May 9, 2019. He scored his first try with the French giants in a European challenge against Bayonne on January 18, 2020.

In November 2020, Villiere earned his maiden test call up to the French national side following a number of impressive shows for Toulon. He made his test debut against Italy where he scored a wonderful 50 metre try.