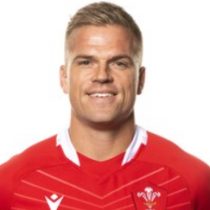 Anscombe broke onto the rugby scene after he was the top scorer at the 2011 IRB Junior World Championships scoring 84 points, including 18 points in a 33-22 win over England in the final to guide his native New Zealand to a world title.

He had an impressive 2012 ITM Cup campaign and was the top point scorer in the competition, earning a Super Rugby contract with the Blues. He made his Super Rugby debut for the Blues, against the Chiefs in 2012 and represented Auckland in the ITM Cup since his first year out of school in 2010.


His stylish performances helped guide the Chiefs to 2013 Super Rugby success, as he finished top scorer with 166 points from 13 games across the season, including five tries, as his team were crowned the best in the Southern Hemisphere.


Dual qualified due to his Welsh mother, Anscombe headed north in 2014, linking up with Cardiff Blues, for whom he has played over 76 times for scoring over 600 points, the most notable undoubtedly being the 78th minute penalty he kicked to secure a 31-30 win over Gloucester in Bilbao in 2018 year, clinching the European Rugby Challenge Cup for his team.


With 26 caps and now established as first choice for Wales in the number 10 shirt, he has played a huge part in the country’s record breaking winning run, starting seven of the nine test matches this season at outside half, including four of the five wins in the Six Nations Grand Slam success.


In April 2019, Anscombe ended rumours linking him with a move away from Wales when he confirmed that he would leave Cardiff Blues for rivals Ospreys, the move allows him to continue to represent Wales.