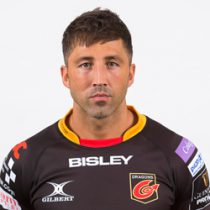 Former IRB Junior Player of the Year Gavin Henson joined Bath Rugby for the 2013/14 season from London Welsh. In 2005, he was instrumental in Wales winning their first Grand Slam in 27 years, announcing himself as an astute all-rounder at centre.

Wales repeated this feat in 2008, with Henson at the defensive helm of the Welsh midfield. A British and Irish Lion on the 2005 tour to New Zealand, the Bridgend-born Henson was an original member of the Ospreys region from its inception in 2003, where he secured two domestic titles and the Anglo-Welsh Cup .

Henson has made previous stints at Saracens and also for Toulon.

On 23 January 2015, it was announced Henson would be leaving Bath to join RFU Championship side Bristol on a one-year deal but was released four months early from his contract to take his place in the Bristol ranks, being replaced at Bath by incoming London Irish utility back Tom Homer.

Henson won the last of his 33 Wales caps against England in 2011 and also played one Test for the British and Irish Lions in 2005.

In March 2017, he signed a deal with Welsh side Newport Gwent Dragons, this deal would see Henson return to a Welsh side for the first time since leaving Cardiff Blues in 2012.