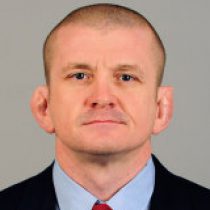 Rowntree made his first-team debut for Leicester Tigers in 1990 against Oxford University.

He went on to enjoy great domestic success and went on to make his England debut against Scotland in the Five Nations tournament, coming in as an injury replacement.

His performance there subsequently got him included in the 1995 Rugby World Cup, the 1997 British Lions tour to South Africa, playing 6 games and the 1999 Rugby World Cup.

After a career spanning 17 years, Rowntree hung his boots in 2007 and climbed his way into the coaching ranks of Tigers and England for the 2008 Six Nations Championship.

He was a central figure in the British and Irish Lions historic tour triumph against Australia in 2013 and was also forwards coach for the tour of South Africa in 2009.

After being England forwards coach for eight years, Rowntree left his role with the national team following the disappointing 2015 World Cup campaign.

He was later appointed as Harlequins new forwards coach at the end of the 2015/16 Premiership.

Capped 54 times by England, Rowntree made his Lions debut during the 1997 Tour to South Africa and toured eight years later in New Zealand.

After retiring from the game, Rowntree toured with the Lions as their Scrum Coach in 2009, and then in 2013 as Forwards Coach during the historic series win over Australia.

Rowntree was appointed as Assistant Coach for the British and Irish Lions ahead of their tour to New Zealand. In June 2018, Rowntree decided to leave his role as forwards coach at Harlequins for personal reasons.

September 2018 saw him sign a deal with the Georgian Rugby Union as forwards coach for the period including the 2019 Rugby World Cup and will then join up with Pro 14 side, Munster as forwards coach