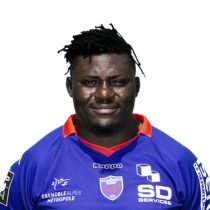 Breaking into the Narbonne team in 2016, Hans Nkinsi quickly made a name for himself as an uncompromising second rower.

His breakout year with Narbonne caught the attention of Grenoble who quickly signed the abrasive forward in 2017.

Having starred for Grenoble, Nkinsi was courted by a number of TOP14 clubs but opted to sign for Castres in 2019.

Struggling to break into the matchday 23 at Castres, Nkinsi was released from his contract at Castres in March 2021 in order to join PROD2 side Provence as he goes in search of more game time.