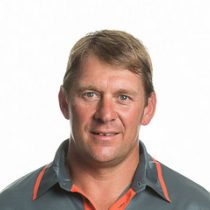 More well known for his coaching achievements in South Africa, Hawes Fourie is a former Boland utility back who also played club rugby for Ceres, Malmesbury and Maties' Victorians.

He also played for the University of Stellenbosch's Dagbreek Koshuis, as well as for the university's second team, Victorians.

He took up coaching, eventually taking charge of Ceres, where he was in charge until 2002. In September of that year, he was appointed the head coach of provincial side the Boland Cavaliers.

He coached them until the end of 2005, when he joined Super Rugby side the Stormers as the backline coach. The Boland Cavaliers appointed Rudy Joubert as Director of Rugby and Fourie became the side's backline coach for the 2006 Currie Cup First Division.

After just a few months in charge, Fourie moved to Bloemfontein to take up a role as the backline coach for the Cheetahs in the Currie Cup and Super Rugby.

He remained in those roles for seven years, but left after the 2014 Super Rugby season to become the head coach of Kimberley-based side Griquas. He coached them for two seasons, on each occasion helping them qualify form the Currie Cup qualification series to participate in the Premier Division, before returning to Stellenbosch as the head coach of Varsity Cup side Maties.

At Maties, he has helped the university re-establish itself as the top team in the Varsity Cup, guiding them to four successive finals and winning back-to-back titles in 2018 and 2019

In June 2019, he signed a 4-year contract with the Cheetah's as the sides new head coach.