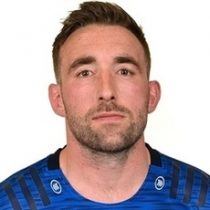 Jack Conan has showed promise from a young age and represented Ireland at U18, U19 & U20. Much has been expected of the powerful back-rower. Ever impressing performances when standing in for the likes of Sean O'Brien & Rhys Ruddock have put Conan on the map and he is on the track to a bright future with Leinster and Ireland.

In January of 2015, Conan was named in the Irish Wolfhounds team to take on the England Saxons as a result of his hard work. If this young Leinster back-rower continues to produce we could see him as a more prominent figure in both the blue jersey of Leinster and green jersey of Ireland.

Conan made his international debut for Ireland in August 2015, he had announced himself by scoring a try a minute into his Leinster debut two years previous.

He was then ravaged by injury, only completing 80 minutes four times for the province last season after 10 weeks on the sideline with a broken foot and then a further three months out with an ankle complaint. In between this he won man of the match in February 2016 - away to Cardiff Blues in the Pro 12, setting up Nacewa for a game-clinching score, further highlighting his potential.

After returning to full fitness during pre-season, Conan’s injury nightmare continued into this season as he was forced to undergo ankle surgery after sustaining a problem in a friendly win over Gloucester at Tallaght Stadium. After biding his time and proving himself in a couple of Leinster A fixtures, Conan played against Connacht at the RDS, as he made his first start at the RDS for over a year.

Conan put in another dominant display against the Dragons in late November, which resulted in yet another man of the match award. His self-confidence and positivity has remained through it all and now Conan is focused on returning to the heights he had reached before injury struck him down.

In April 2017, Conan signed a new contract with Leinster keeping him at the club for the 2017/18 season & beyond. As of the 2017-18 season. He also featured on Ireland’s successful tour to Australia in June 2018 after making two appearances for his country in that year’s Six Nations Grand Slam triumph.

While 2019/20 proved to be another year hampered by injury, Conan has been part of a further three PRO14 title successes with Leinster as he surpassed 100 provincial caps. He also scored the only try in the 2021 PRO14 Grand Final victory over Munster, earning the Player of the Match accolade for his performance in the silverware showpiece.

Following the 2021 Six Nations, Conan had 20 Ireland appearances and over 100 for Leinster

On 6 May 2021, Conan was named in the squad for the 2021 British & Irish Lions tour to South Africa. He made his Lions debut against Japan at Murrayfield and featured in three further tour matches before the test series.

He started all three test for the Lions.